I received the Brinyte PT18 pro Oathkeeper directly from Brinyte for the review.

Brinyte PT18 pro Oathkeeper is a very well built tactical flashlight that uses a 18650 battery as a power supply, included in the package, and is rechargeable quickly thanks to the magnetic charging port. The beam of the Brinyte PT18 pro produces over 2000 lumens with 360 meters of launch and 32000 candles.

Brinyte PT18 pro Oathkeeper is equipped with a Cree XHP35 CW LED, has 4 light levels (Low, Middle, High and Turbo) plus 2 special levels (Strobe and SOS). As previously mentioned, it is mainly powered by a 18650 lithium battery or alternatively by 2 CR123A batteries. It is IP68 certified (submersible up to 2 meters) with impact resistance of 1m. The Brinyte PT18 pro Oathkeeper arrived in a cardboard box partially protected inside by a soft sponge. The sales package is different while mine, being an evaluation specimen, does not have any writing on it.

Inside the box I found:

In the package there was also a nice gift from Brinyte, a beautiful and colorful bag with a greeting card and a nice gadget inside. The holster supplied with the Brinyte PT18 pro Oathkeeper is in semi-rigid cordura with velcro closure. In the lower and upper part it has circular openings that allow the tail to come out and therefore the possibility to use the torch even if inserted in it. It is also prepared for use with the BR Tactical Ring inserted in the PT18 pro.

On the sides there are two small pockets for inserting a battery.

Also particular is the rear hooking system of rigid plastic, 360 degree rotatable, with which we are going to hook the torch to the belt. This system allows you to adjust the angle of the holster in 12 positions. The holster is very robust and by testing I find the rotation of the holster very practical which favors its use even in a sitting position. The steel clip, included in the package, once inserted in the torch remains firm and allows and easy insertion into jeans. On the clip we can insert a lanyard in its two slots. The battery that I found included in the package is an IMR 18650 protected by 3100 mAh with the button marked Brinyte. One of the many advantages of the Brinyte PT18 pro is that it works with 18650 batteries button top and flat, protected or unprotected. Do not miss the lanyard with a small carabiner to carry the PT18 pro in your hand safely. The Brinyte PT18pro Oathkeeper has excellent build quality; good thicknesses as well as materials, rounded edges and no construction residue. Quality also the 3 switches available. In hand it holds and holds well despite the length of 164mm. Very nice the line as well as the designs on the body and on the head. The head and the tail cap have a particular processing with an anti-slip knurling with lines. The PT18 pro is made of aluminum alloy with a military-grade hard anodized finish. My Desert Tan version highlights all the details that distinguish it even more. The writings on the torch are well made and legible.

The Brinyte PT18 pro has IP68 waterproof rating (submersible at 2 meters) and withstands impact up to 1 meter. 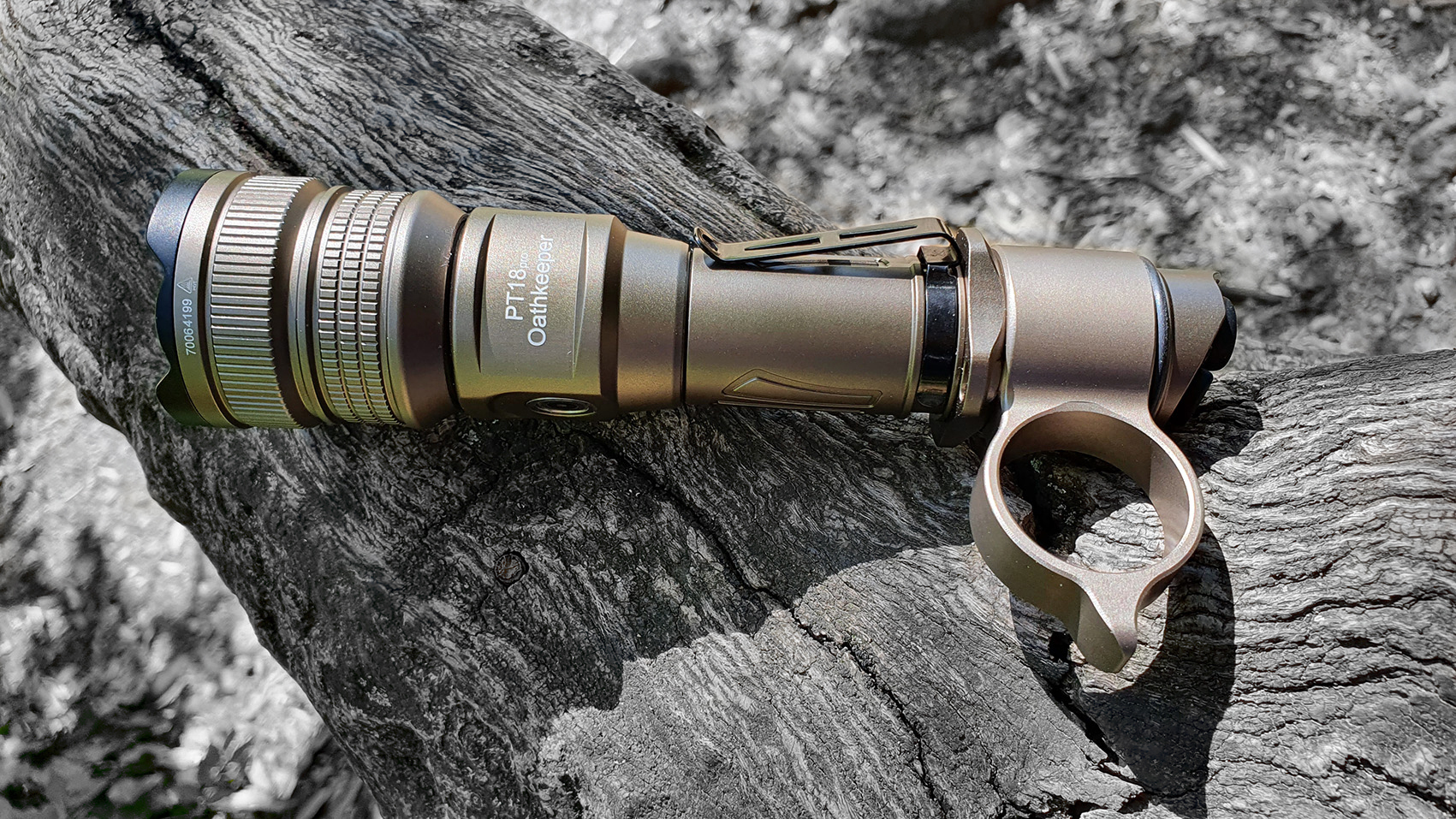 Brinyte PT18 pro Oathkeeper is sold with a very useful and particular accessory, the BR Tactical Ring. In addition to the classic tactical ring, this extractor ring in aluminum, in the same color as the torch, once inserted in the tail of the PT18 pro allows you to use the torch by keeping the index finger inserted in it, favoring a better tactical grip and in other operations significantly increasing the speed with which we are going to extract the torch.

Once inserted into the tail cap it remains firm thanks to the O-ring located at the base of the cap. The BR Tactical Ring has a pointed shape which also makes it a valid self-defense tool.

1. Unscrew the tail from the torch.

3. Screw the tail with the BR tactical ring to the torch. 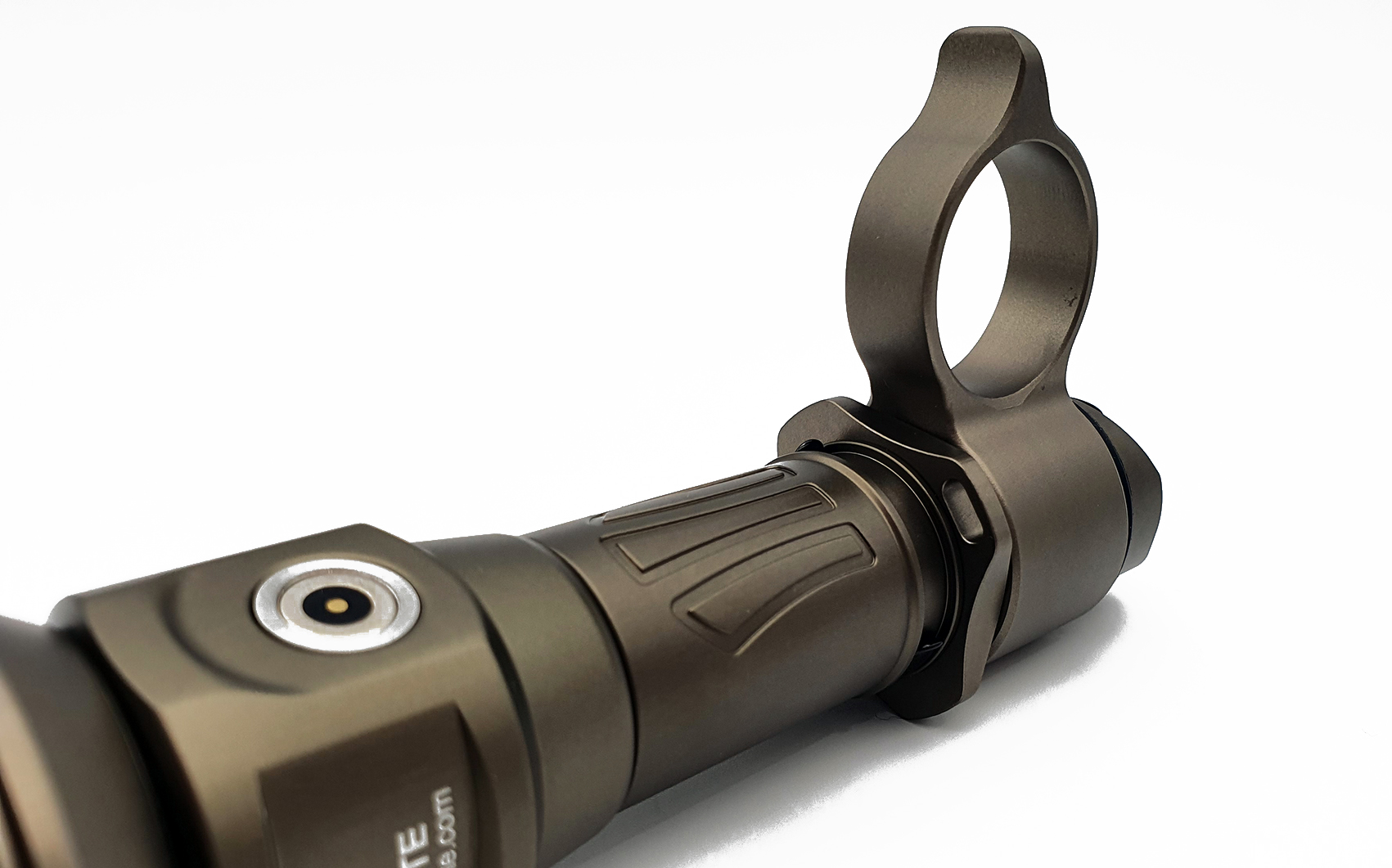 On the head of the Brinyte PT18 pro there is a SMO parabola with the CREE XHP35 LED in the center with Cool White tint. The PT18 pro has a dark bezel, removable, slightly crenulate and protruding which protects the glass of the PT18 pro. Good lens with anti-reflective coating. 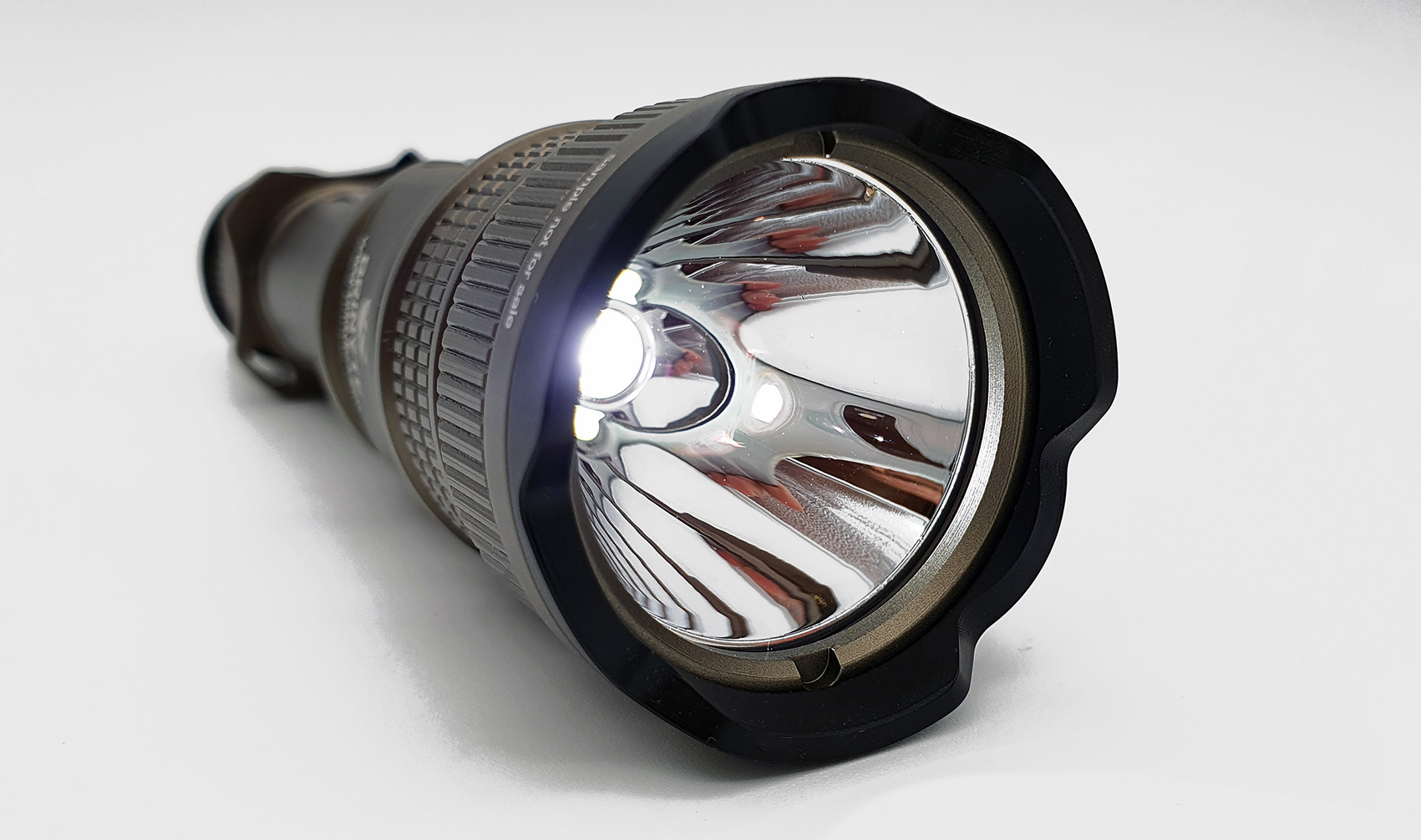 The Brinyte PT18 pro has a side switch and two tail switches.

The electronic side switch has a status LED in the center, is made of metal and has good touch sensitivity producing a silent click. The status LED under the side switch gives us information about the remaining charge level and the status of the battery being charged. Once the PT18 pro is turned on, the LED lights up for a few seconds to indicate:

• Green: Charge equal to or greater than 70%

• Flashing Red: Charge equal to or less than 10%

With the side switch we have complete management of the UI (User Interface). 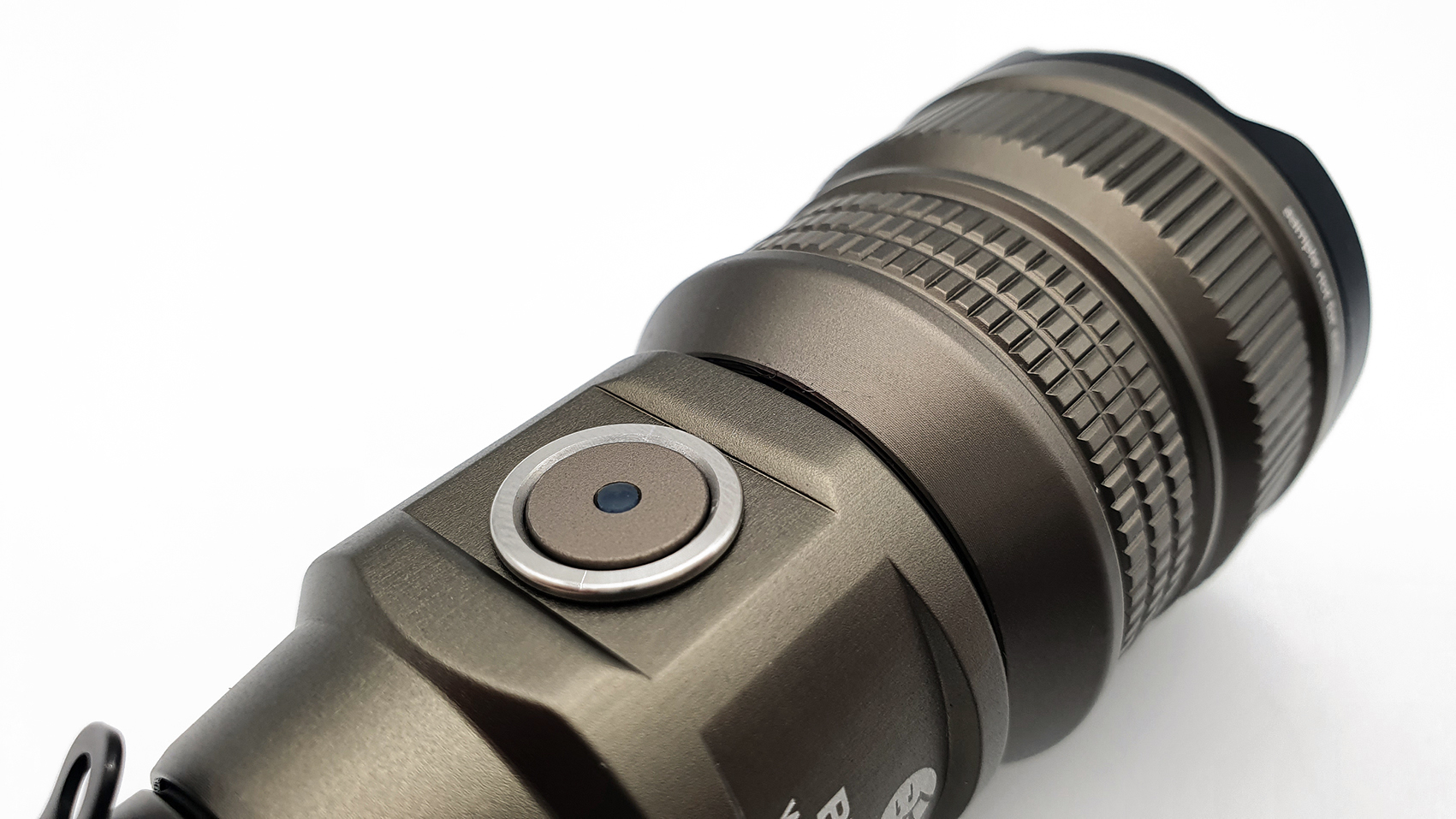 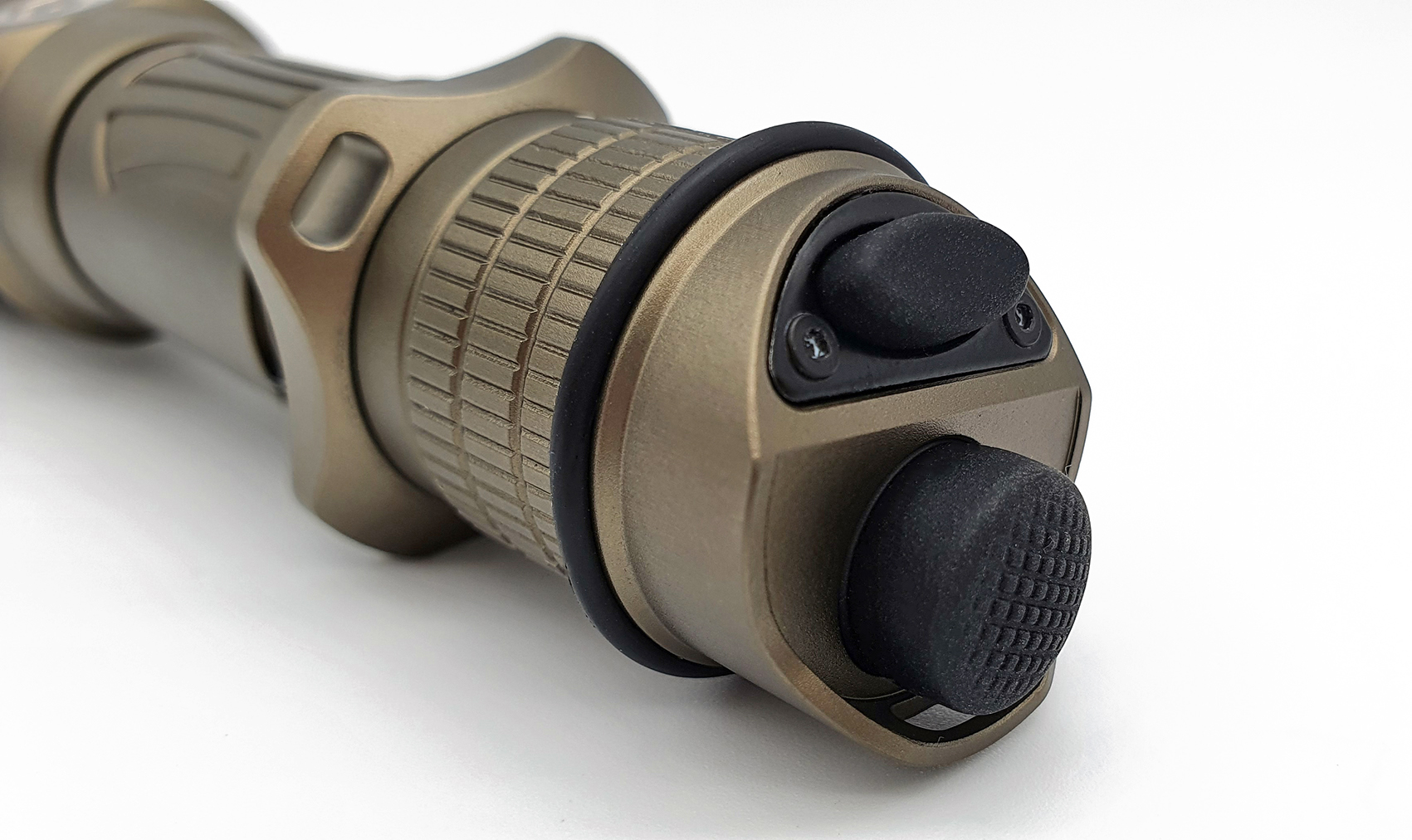 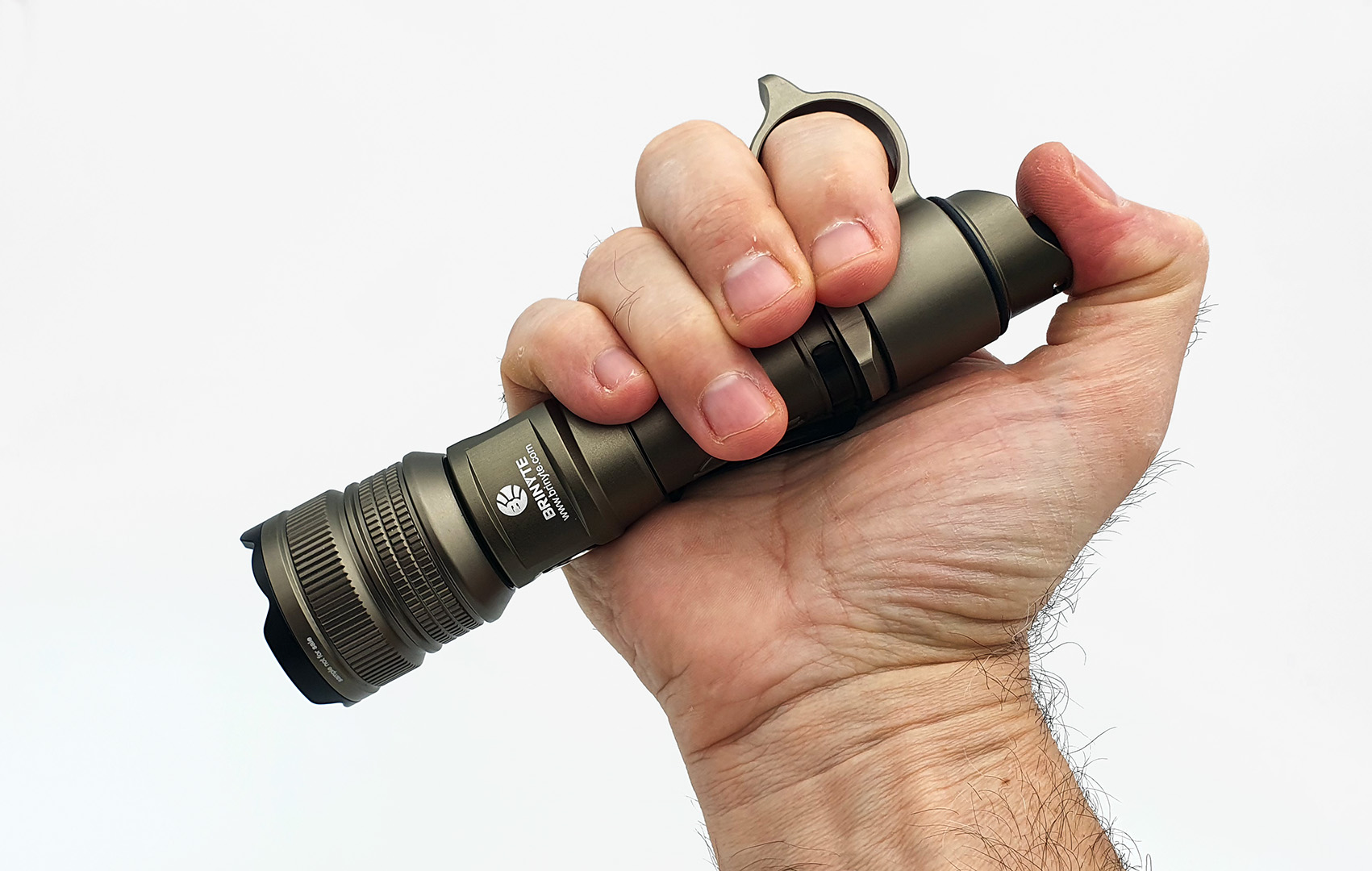 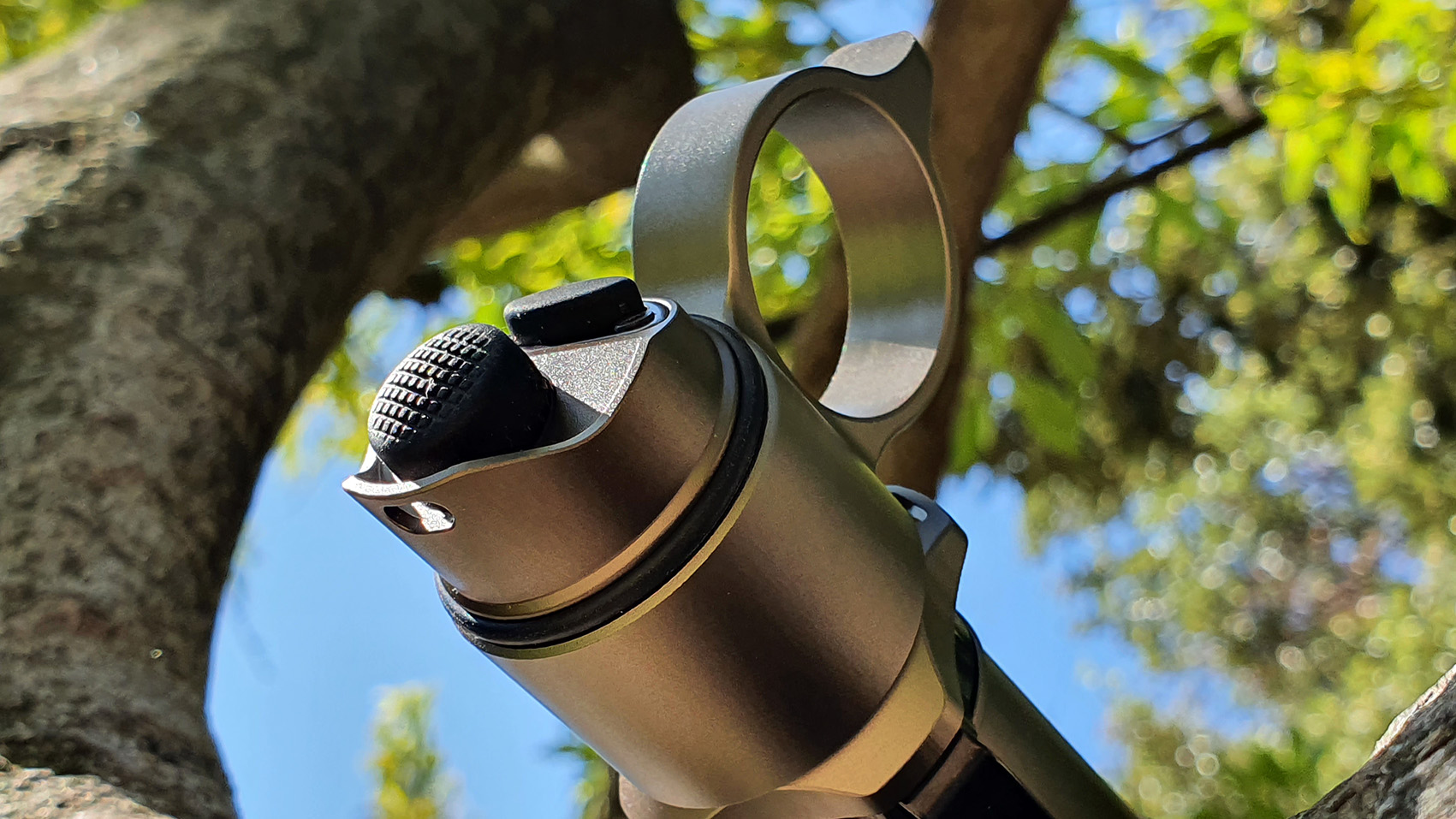 Under the projector, on the opposite side of the side switch, there is the magnetic fast charging port. This charging system has been updated with the "Pro" version of the PT18 and replaces the previous USB port. To charge the battery inside the flashlight, just bring the supplied magnetic cable close to make contact. This “on the fly” connection system certainly speeds up charging operations and provides a greater degree of safety against the infiltration of dust and liquids. The braided charging cable in the Brinyte PT18 pro Oathkeeper package is quality and is 1 meter long.

On the charging cable there is a small blue status LED. When the battery is charging, the status LED in the center of the side switch lights up in a constant red color. When charging is complete, the LED turns green. In case of anomaly, the LED will be colored in orange.

In my tests, the battery was fully charged in approximately 2 hours with the maximum charging current of 2A. The only unscrewable part of the PT18 pro is the tail cap. At the negative pole and the positive pole there are double plated springs that allow excellent contact with the battery for optimal current circulation. The fillets on the torch body, which has a double chamber, are not anodized. They are well made and arrive well fattened. There is also an O-ring for protection against dust and liquids.

Slightly unscrewing the tail cap we obtain the block of the tail switches while the side switch will continue to turn on the flashlight. 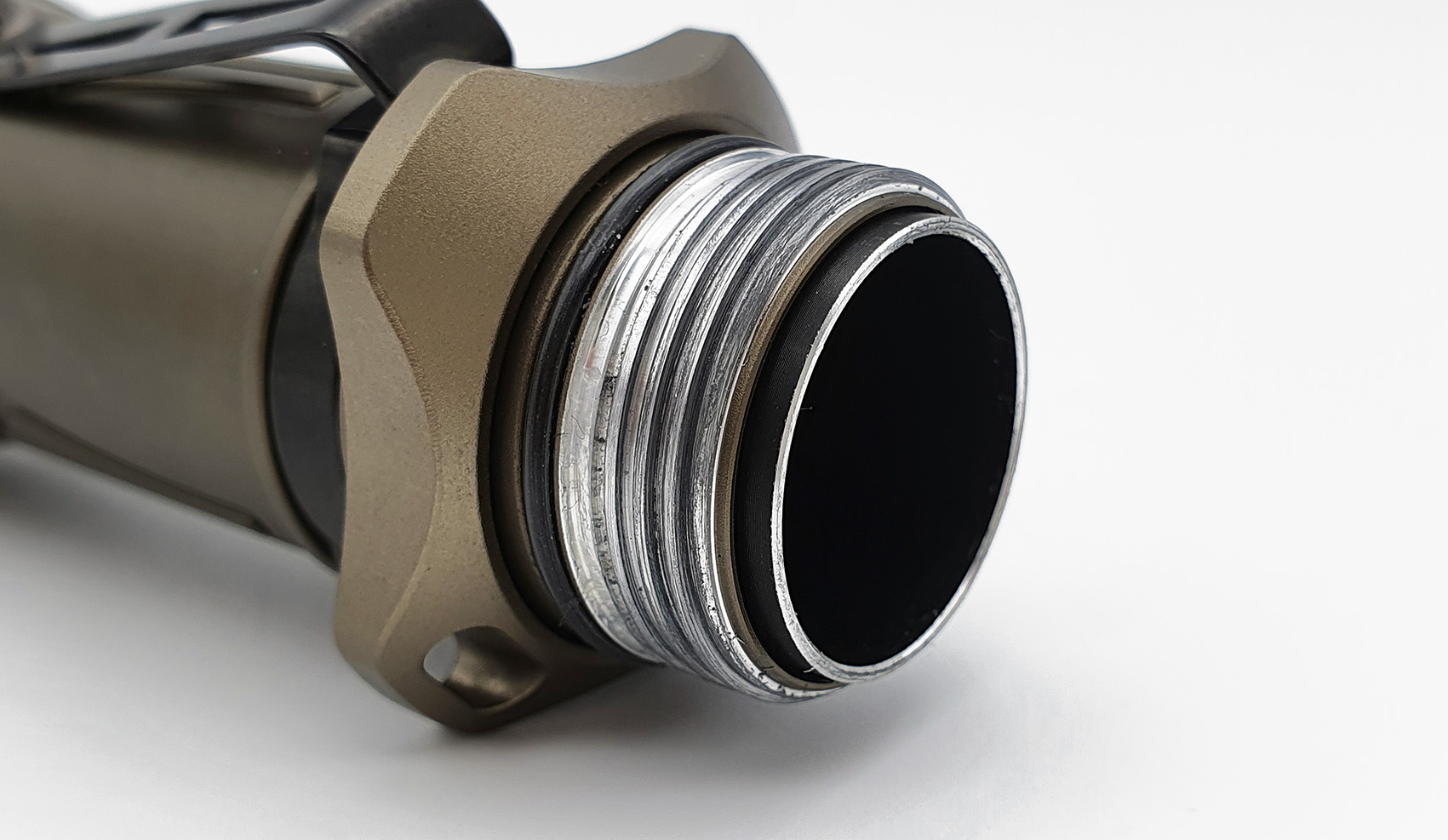 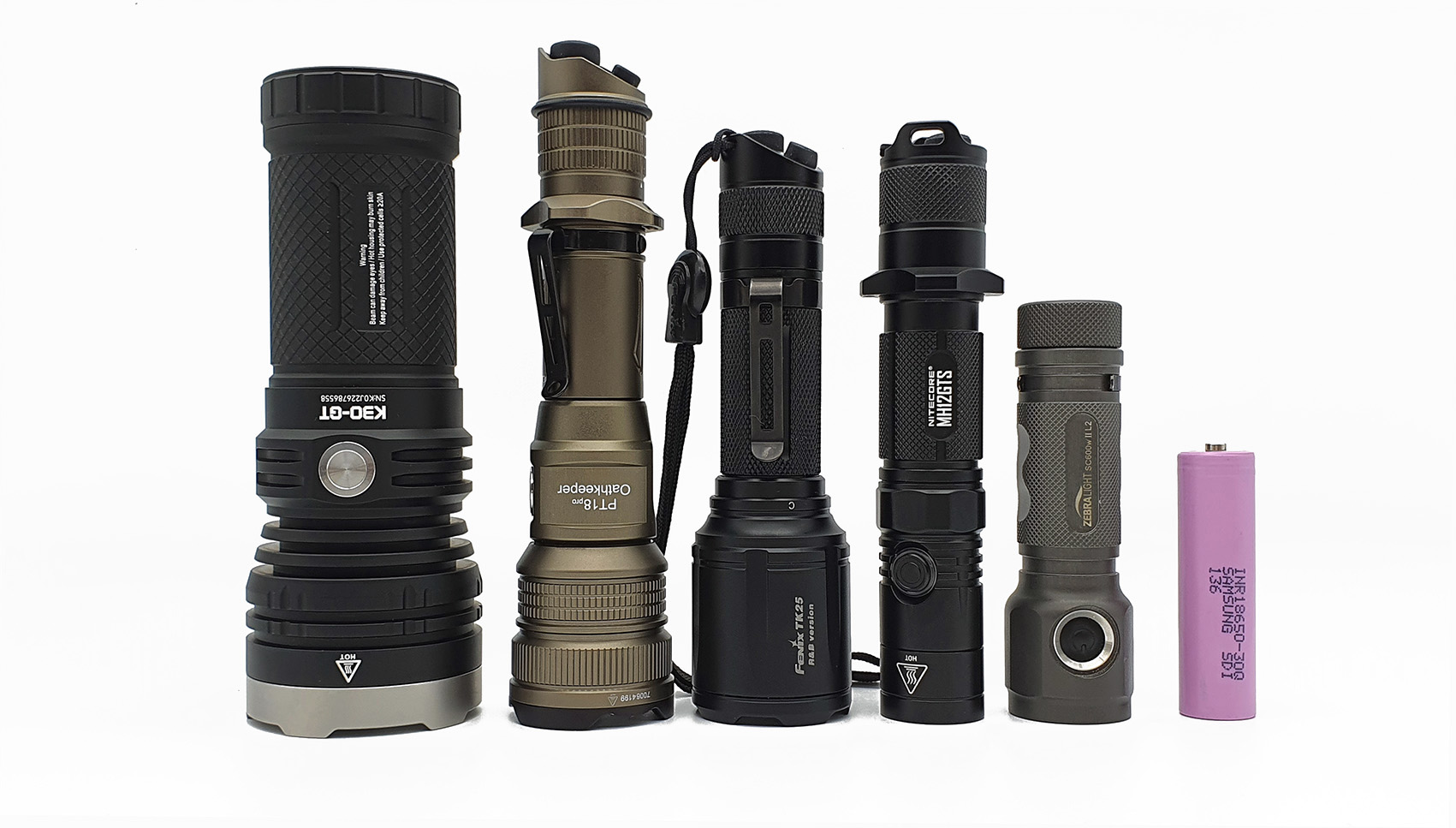 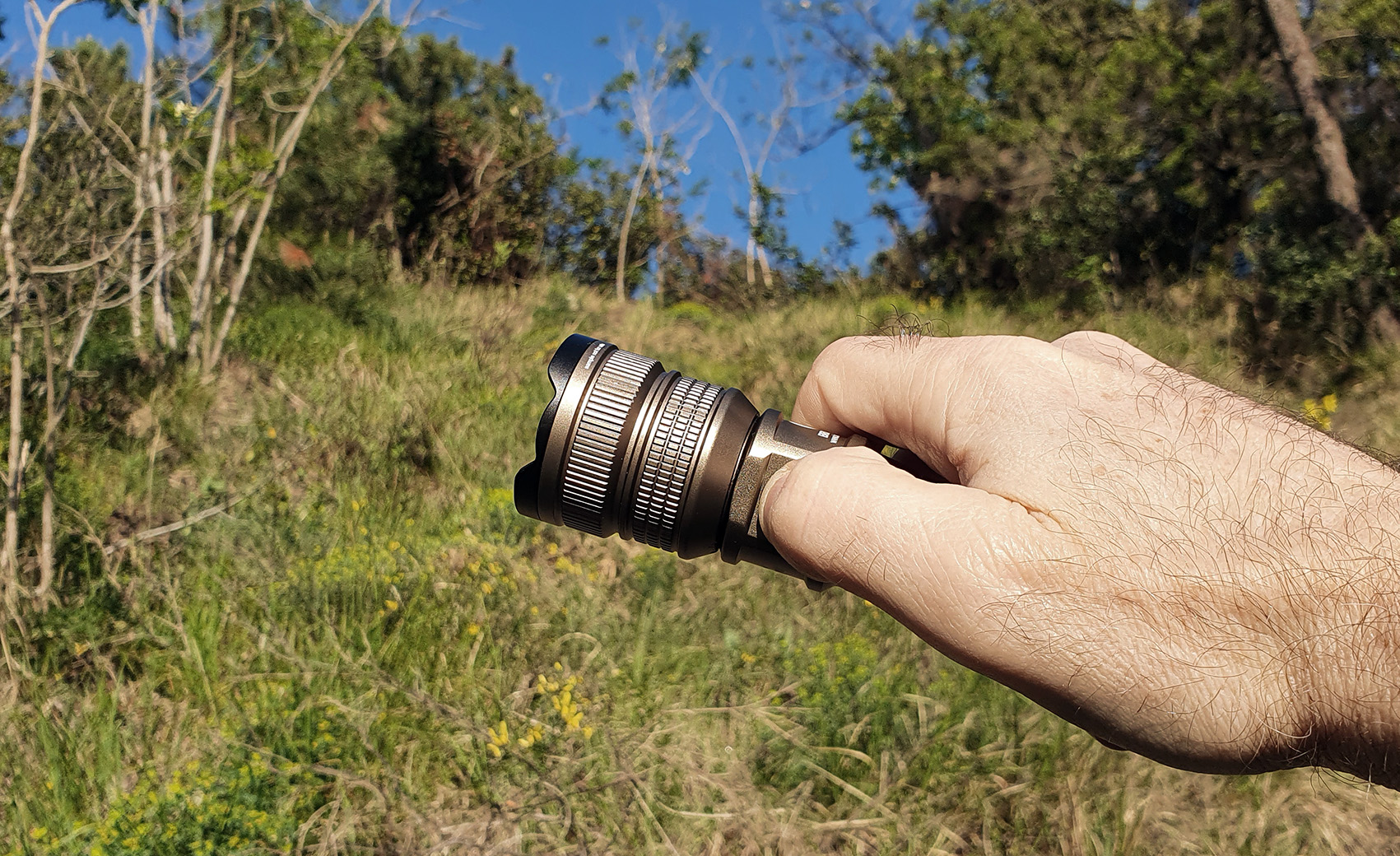 The Brinyte PT18 pro Oathkeeper has 4 normal modes + 2 special modes (Strobe and SOS). Level spacing is good even if a Moon level is missing.

It has three switches, 2 in the tail and 1 on the side. Each switch allows access to different operations.

Let's start by talking about the two switches in the queue.

The round shaped switch, Tail Primary Switch,has an ON / OFF and Momentary-On function for the Turbo; so if we press halfway we get the momentary Turbo while if we press completely until the click we get the constant Turbo.

The oval shaped switch, Tail Side Switch, allows, if the Primary Switch in the tail is in the OFF position with the light off, access to the temporary Strobe.

If the Primary Switch in the queue is in the ON position, then when the light is on, allows you to cycle the 4 available levels (Low-Middle-High-Turbo) and with a long press activate the Strobe.

The side switch, Front Side Switch,

With the torch off, keeping the switch pressed, access to the Low level.

The PT18 pro has a memory function, allowing the torch off, with a click, to recall the last level used. 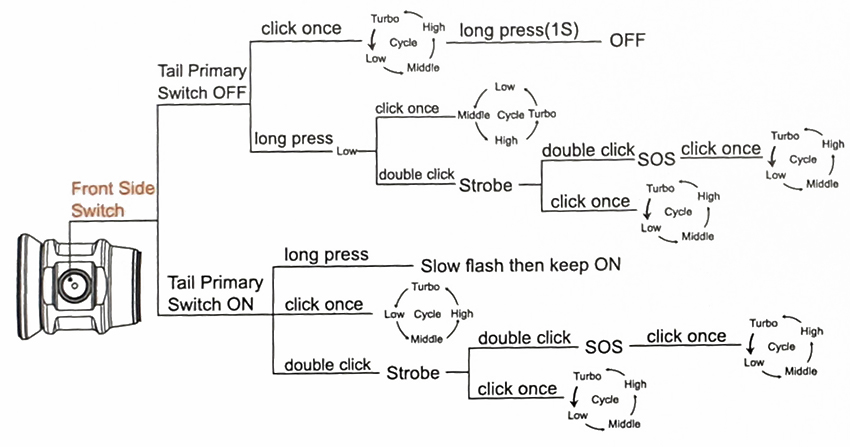 Through the Front Side Switch the PT18 pro has an electronic lock. With the flashlight off, make 3 quick clicks to lock the side switch. To unlock redo 3 clicks. However, this blockage does not prevent the operation of the tail switches. 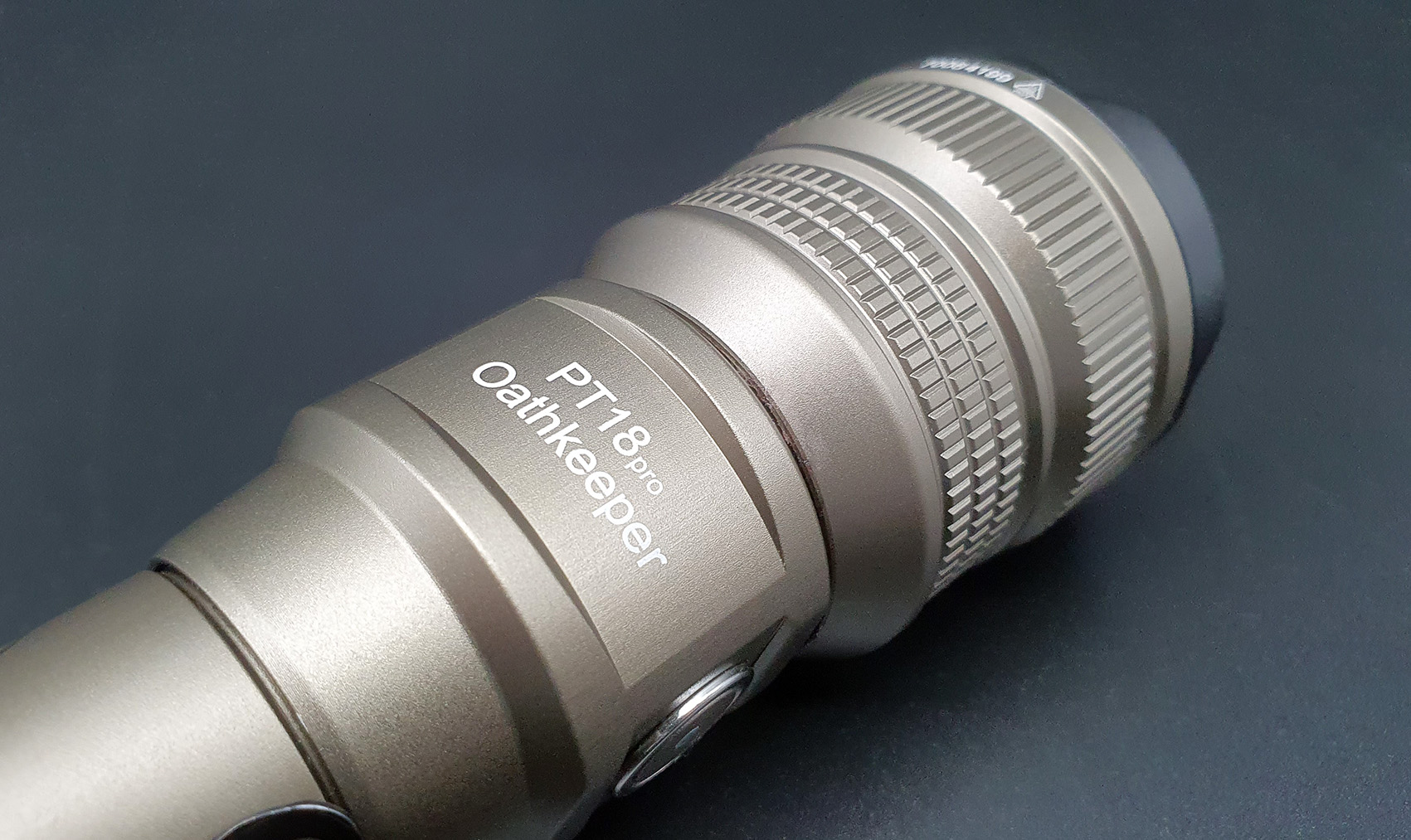 The beam of the Brinyte PT18 pro has a good color, not too cold and a well-concentrated spot which suggests, as in fact, an excellent shot. In the center the spot is white while the crown that surrounds it tends to greenish yellow until it reaches the edges of the spill with a tint that turns slightly to violet. I haven't noticed any PWM on all levels.

The start of the spill from the feet is about a meter or more. The value of 44500 candles found by me, in the test with the Luxmetro LX1330B, is higher than that declared by the house.

The runtimes performed with the Brinyte PT18 pro Oathkeeper at the Turbo (2000 lumens) and High (450 lumens) levels were done indoors with a temperature of about 20 ° C. The battery used is the one found in the package, a fully charged 3100 mAh IMR 18650 Brinyte. At the end of the test, the battery measured approximately 2.7V.

I would like to emphasize that the values expressed by the graphs must be taken as a reference above all because they are made with means and environmental conditions different from those used by the parent company in the laboratory.

The first test was made with the PT18 pro on Turbo (2000 Lm.). After exactly 1 minute we have a first sudden drop in the light output followed by a second drop after 4 minutes. As you can see from the graph, the times declared by the house (1min. + 90 min.) are real.

Another test was done with the PT18 pro at the High level (450 Lm.). Also in this test the data declared by Brinyte (150min.) were achieved.

The Brinyte PT18 pro Oathkeeper surprised me positively; quality in materials and construction, complete in the user interface and excellent light output.

The Brinyte PT18 is very beautiful, even more so in this color. The management of the UI with the three switches it has is very practical. The BR Tactical Ring is useful and aggressive and completes the package with the practical rotatable holster and the matching lanyard.

I hope in the future in a version with 21700 battery, now almost a standard, and the possibility of choosing a warmer beam color.

Thanks for reading the review. 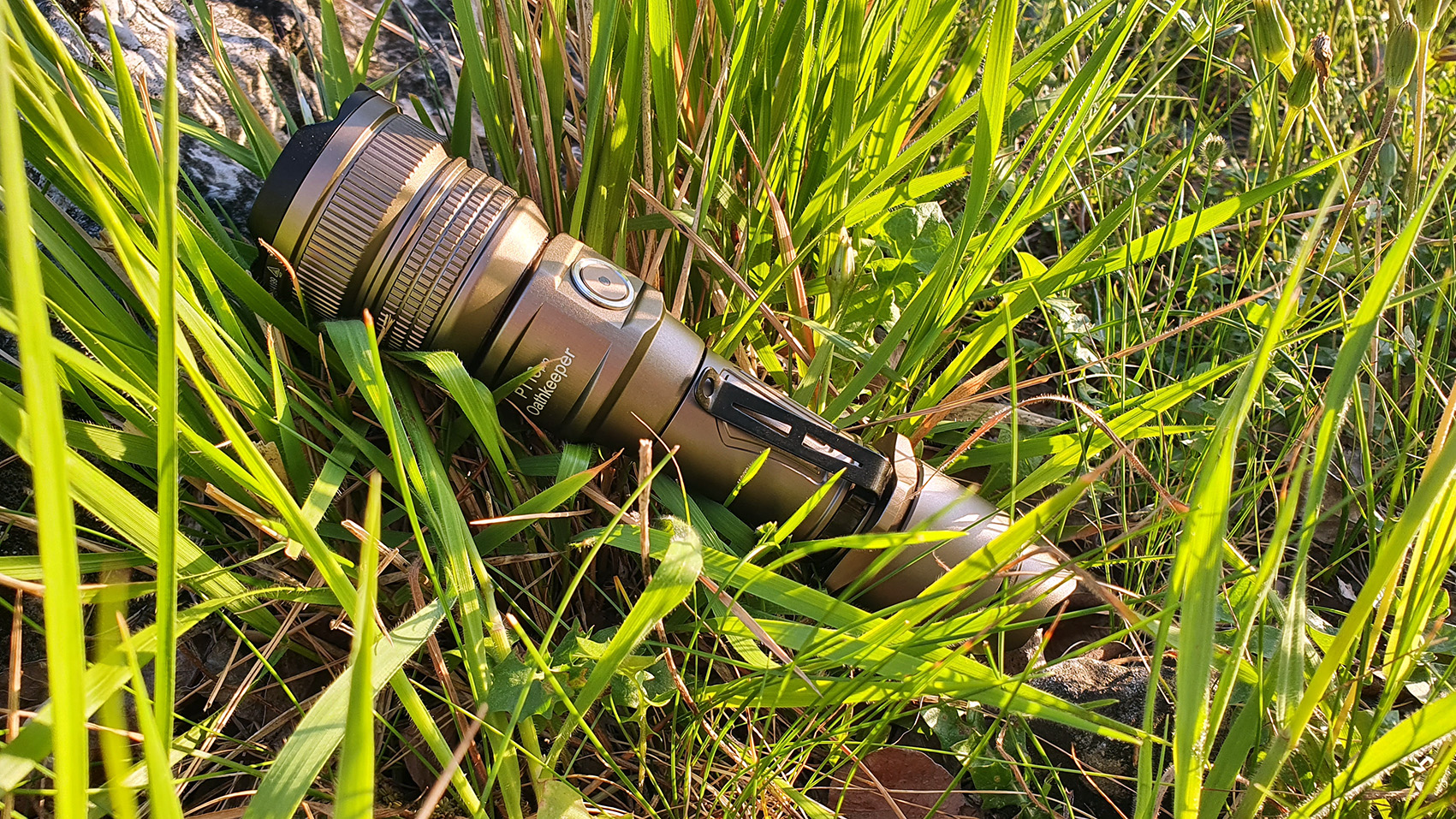